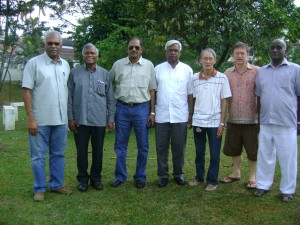 CCI International Team met for their first meeting after the General Assembly in Bangkok last July. The meeting was held at La Salle Hall, Petaling Jaya, Malaysia from the 17th to 19th January 2012.

The IT adopted a 'Minimum Guiding Principles' document as a reference document for the movement.

One of the important decisions by the IT is about the project 'Vatican II + 50 - A Cardijn Perspective'which will be launched in a Conference to be held in Manila, The Philippines from the 11th (evening) to the 14th October 2012.

CCI Philippines have already started the process of preparation for the October conference with the launch of a financial drive.

As part of the 3 year project, an Inquiry Campaign will be launched in the next few weeks to ascertain the views and experiences of the laity on the spirit and decisions of Vatican II with particular reference to the social teachings and lay participation.

Priority countries for extension in 2012 will be: Thailand, Singapore, Indonesia and Vietnam.